Previous: Converting units | Home | Next: Reasoning about points and lines (2)
Suppose we had a collection of $(x,y)$ points as shown here. 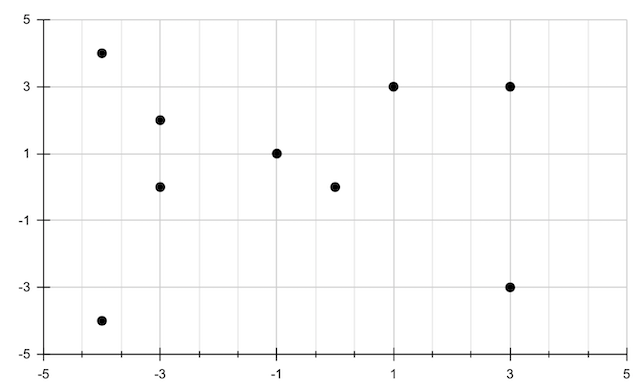 Let's look at some Prolog code that will allow us to mathematically reason about these points. But what reasoning can we do about points? Well, to start, two points can form a line right? So we can look at lines that are possible to form by pairs of points.

Specifying points in easy in Prolog. They're pretty fundamental, so they're like facts. We can just type up some point(x,y). facts as you can see at the top of the code below, which describes the points in the above graph.

For some more reasoning, let's also see if Prolog can tell if lines it finds are horizontal and/or vertical line. How?

We know from math that a line is horizontal if it passes through two points whose $y$-coordinates are the same. You can see the horiz clause below, horiz([(_,Y),(_,Y)]). See how the Y is forced to be in common between the two points on the line (and we don't care about the $x$-coordinates).

Pretty similar for vertical lines: we look for points that have the same $x$-coordinate, as in vert([(X,_),(X,_)]), where you can note how the X coordinates are forced to be the same for both points of the line (and we don't care about the $y$-coordinates).

Now you try. Try one of the goals given below. Also feel free to make up your own set of points and try the goals again.

See your results here:
Try these for some goals: Be sure to check the results displayed with your knowledge of math. Is Prolog doing this correctly?