Previous: Coloring a map | Home | Next: Simulating digital circuits (1)
Suppose your job was to solve the right triangle shown below, meaning find every side and every angle: 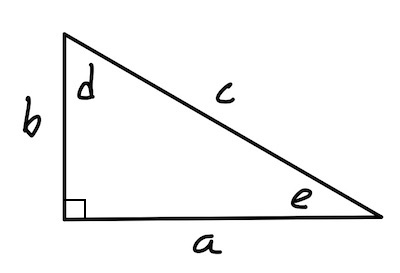 To do so, you'd have to know at something about at least some sides and/or some angles from the start. Wouldn't it be neat if we could tell the computer what we know about the triangle and have it tell us how to find the rest? Let's code some Prolog do so this.

Some immediate questions arise: 1) how do we represent the knowledge of math and trig. in code? 2) How would we code a way of using this knowledge to explain to us how to solve the triangle? It turns out that Prolog is well suited to handle both of these issues.

We won't go so far as to try and have the computer 'discover' math on its own. We'll tell it the relationships that hold for a right triangle, and let it do what it wants with the relationships. There are two parts, 1) the trigonometry and 2) the mathematics.

Let's focus on the representing the trig knowledge first. We'll define a predicate called rule that works as shown here:
rule([var1,var2,...],text-description)
Move the mouse over a dotted box for more information.
You can see the 8 rule statements in the code below. You can likely figure the rest out for yourself.f

Now you try. Try running it with the goal advise([b,c]).

See your results here:
Now, what about the math? This is all contained in the advise clause. It works like this:

If you get this all figured out, try to write your own code that will work for non-right triangles (code up rules involving the Law of Sines and Cosines).